Getting Started Guide for MMO Game Atlas is a guide to help new players get their sea legs. This guide references useful Atlas Wiki sections that newcomers to the game might want to look at in-depth, and provides an overview of the first steps to the successful conquest of Land and Sea. 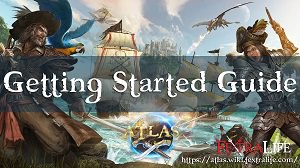 Getting your Feet Wet

Atlas is a game that revolves around Survival, Character Optimization and Exploration and Conquest of your environment. You will begin the game with basic Attributes (Stats), which can be increased as you level up, and your initially chosen Skills, which you will also add to as you increase your level and spend skill points. To begin with, you will only have your Fists available, so your first order of business will be to find and harvest basic Resources such as Wood, Thatch and Stone to enable you to Craft some Equipment.

To gather Wood, for example, you must approach a tree and punch it with your fists by clicking your mouse. This will give you some wood items that you can then use to craft your first Tools and Weapons (likely a Hatchet or Pickaxe to enable faster  and more efficient Harvesting, or a Mace or Spear for defensive purposes!)

You must also consider your Survival needs: satisfying thirst, hunger and proper nutrition (represented by Vitamins in your UI), as well as surviving the environment's various dangers, such as extreme temperatures and other environmental hazards. This Vitamins element of feeding your character means that, unlike other survival games, Atlas proposes that the player should consume a varied diet rather than just get by on one single food source.

Different ecosystems are found depending on the Biomes that they develop in, so you will find a wide variety of Creatures to challenge and consume to fulfill this need depending on your location, as well as different plants and other resources to harvest. Explore your surroundings fully and get to know what can be found where.

Atlas is a survival game, and as such you need to take care of a few different aspects of keeping your character alive. The key things to look out for in terms of survival are Health, Hunger or Food, Hydration or Water, Stamina, and Vitamins.

In addition to maintaining your health and wellbeing in order to survive, you must also of course survive the various other hazards of Atlas. There are many different Creatures roaming the lands and seas of Atlas, and while some are passive and will simply run away from you if you approach, others will attack you if you bother them (such as by punching them!) and yet others will simply attack you on sight. Be wary of the many Creatures in Atlas and prepare to have to fight for your life! Environmental hazards are also to be considered, and can include threats such as Tornadoes or Water Spouts which can do huge damage to your Ship, and even simple darkness, which at its worst might render you blind! Preparation is key!

Leveling Up and Attributes

You will gain experience (XP) as you complete activities such as harvesting resources or killing creatures. As you gather more XP you will level up, which gives you points to spend in your Attributes and your Skills (see below). Depending on your playstyle you may choose to level different attributes, but as a beginner it may be wise to spend a good few of your first points in Health to help you stay alive. Stamina and Movement Speed are also good choices to spend points on early in the game as the can help you run faster and further in order to outrun hostile creatures, as well as being of benefit in combat. Melee Damage is of course a good attribute to level for those who intend to prioritize combat, and can also increase your yield when harvesting by hand. Points spent in Weight can be of use, allowing you to carry more resources with you, but most players would consider points spent in Water or Food to be a waste.

Explore outside your original Freeport and begin harvesting Resources as soon as possible. Players will first want to obtain:

Punching rocks and trees results in a loss of Hitpoints (Health Loss), so it's wise to craft Tools such as the Hatchet and Pickaxe as quickly as possible. Using Tools also increases the Harvesting yield, so you'll get more Resources per tree or rock and so on. Equip Tools via your Inventory (you may wish to add them to your Hotbar for quick access) and use the melee attack to harvest from rocks and trees and other harvestable assets in the environment around you.

Once you have crafted your basic Tools there are a number of basic materials to keep in mind as they will quickly become useful as you begin to learn more things to craft.

There are lots of other Resources available to be harvested from the world of Atlas - check out the full list at our Resources page.

Basic Crafting is achieved in your inventory, which you can access by pressing 'I', while more advanced items will require Crafting Stations. The first things you'll probably want to craft are the Stone Pickaxe, Stone Hatchet, and Cloth Armor, as well as a Weapon of some kind.

To begin Crafting, first you'll need to level up, which can be done while gathering the resources you'll need to craft these items, or by killing small animals. Once you have leveled up, spend a point in the Survivalism skill tree to purchase 'The Basics' skill. This will unlock basic items for Crafting, including the Cloth Armor Set and basic Tools such as the Hatchet, Pick and Torch, and the Campfire and Simple Bed, both essential for long-term survival. Unlocked craftable items display the resources required to build them to the right of the UI description; Resources you have enough of to craft the item will show in green, while resources you need to harvest more of will show in red. Once you have the requisite resources in your inventory and the craftables unlocked, you can right-click on the craftable blueprint to see more options, which include the option to craft. 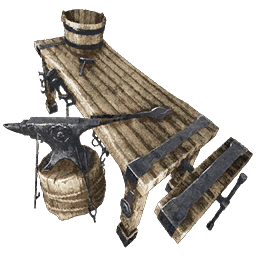 The Smithy is an important Crafting Station and likely one of the first you will build.

As mentioned above, some of the first things you'll want to craft are the Stone Pickaxe, Stone Hatchet, a weapon such as a Spear to defend yourself and kill Creatures for Hide and Animal Meat, and a set of Cloth Armor. Wearing Cloth Armor will help to keep you warm, which will reduce your Food and Water consumption. The resources required to craft some initially useful items are as follows:

In Atlas MMO Game you have a vast Skill Tree to explore and unlock. More than 300 Skills are divided across 16 Disciplines, from Survivalism and Hand-to-Hand Combat to Beastmastery, Cooking and Farming and Captaineering and more.

Unlocking Skills grants various bonuses, from passive buffs such as increased movement speed to crafting packs which allow you to craft various items such as Weapons or Structures, and other specialist activities such as playing instruments to provide buffs to crewmates (eg the Accordion Skill from the Music and Dance Discipline).

There are not enough skill points available within the level cap to achieve every single unlock, so you must choose paths within which to specialize, and may wish to team up with other players in order to work together to have everything available to you as a group.

Engaging in Combat in Atlas MMO Game is a simple affair - simply select your Weapon of choice, decide upon your method of attack and have at it! Different Creatures will require different approaches though, depending on their nature and behaviors, and it's a good idea to learn as much about a Creature as possible before you engage it in combat - for example some Creatures are aggressive in nature and will attack you on sight, so it may be a good idea to begin with to approach these Creatures with caution, perhaps stocking up on Ranged Weapons and Ammo and sneaking around to high ground before engaging the creature. Other Creatures are prone to fleeing as soon as they are engaged in any way, so you may wish to team up with others to flank it, or use a fast-moving tamed Creature to chase it down and kill it.

Exploration: Start with a Raft

Crafting a Raft is the first step in your exploration of Atlas. You must gather sufficient materials (75x Fibers, 20x Hide, 80x Wood), and visit your starting island or Freeport's dock to find the Shipyardsman to commence building your Raft. Once your Raft is complete, you can set sail across the oceans. 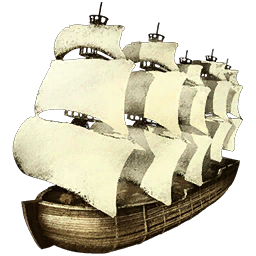 Your explorations may begin upon a humble Raft, but those who persevere may one day find themselves at the helm of a mighty Galleon!

It's perfectly possible to play Atlas MMO Game alone, but it's both more fun and more viable with friends or crewmates, for a number of reasons:

You can invite other players to join your Crew or Company by ?? More details needed.

If you'd rather play alone, though, fret not! You can hire AI crewmembers at Freeports (or rescue more seasoned AI sailors from the wrecks of Ships of the Damned) to help sail your Ships, join you in battle and defend your holdings.

Atlas MMO Game is a very non-linear style of game, and does not particularly require you to fulfil any objectives: if you wish to spend a thousand hours building different Ships, that's totally up to you.

There is an enormous variety of activities to entertain yourself with, from Building  Ships and Forts to varied combat experiences against the natural predators of the landscape such as Tigers and Lions, and the more supernatural threats you might encounter such as the Army of the Damned, Ogres, Dragons or even a Hydra, to Taming and Breeding Creatures to create more powerful ones, and all sorts of other things to do without ever even seeing an objective or questgiver!

If, however, you want to complete Quests, you can absolutely complete quests! In addition to an open sandbox of activities, Atlas also provides a Questline. Details on initial quests and quests systems to follow...

Beware the Armies of the Damned

As you venture out on your first voyages across the oceans, keep a wary eye out for Ships of the Damned - haunted ships which will attack you on sight. You will not be able to outrun them on a Raft or Rowboat, so try to steer clear until you have built a larger ship!