Government in Atlas MMO Game refers to the ability of Companies to rule and govern their owned territories as they see fit, imposing levies, taxes and laws upon their residents or those that wish to gather within the borders.

"Form a company, claim territory and apply taxation and behavior rules to that which you own: be a benevolent governor, a feudal lord, or a ruthless dictator. Territory ownership is visualized on your dynamic zoomable World Map, with Fog of War obscuring uncharted regions and Shroud of War hiding enemy territories out of sight range. Contest other government's ownership of land, structures, or ships to expand your empire! The top large-scale Spheres of Influence on the Official ATLAS' are visualized in real-time on the PlayATLAS homepage. Design your own custom flag per-pixel to apply to your claims, to be famous (or infamous)!"

Once a Company has claimed land in Atlas they are able to govern that land how they choose, including whether non-Company members are allowed to build there, and if they are, how they will be taxed.

Taxation in Atlas is a charge levied on non-Company members living or harvesting within Company-owned land.

In order to charge taxes, the Company must place a Taxation House within the borders of their claimed land, and set the taxation rate, which can be set anywhere from 0-30%. Henceforth, whenever a player not affiliated with the Company harvests resources within the borders of that land, a percentage (as set by the Company) of their harvested resources will bypass their inventory (or their Creature's) and be deposited directly into the Taxation House.

For example, if the tax rate is set at 10% and a non-Company member harvests 200 Wood on Company land, they would have 180 Wood in their inventory while 20 Wood would appear in the Taxation House. 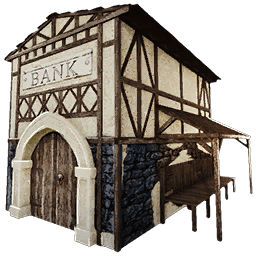