Pre-release screenshots for the upcoming MMO game Atlas, released by Grapeshot Games. Grapeshot is a sister studio to Studio Wildcard, the creators of Ark: Survival Evolved.

These screenshots were released in the weeks preceding the Early Access launch of the game on PC. 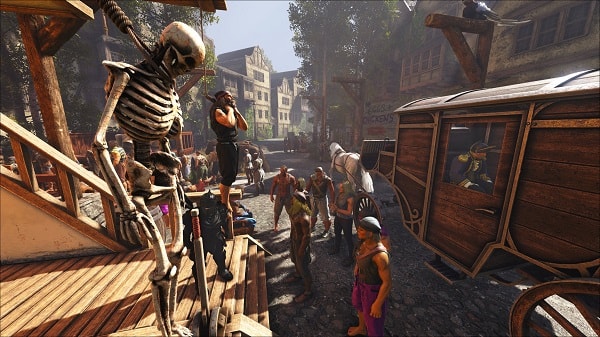 "An officer in a horsedrawn carriage turns away from a grisly public execution in a Freeport. The resulting uniquely-identifiable player skulls can be used to trade for bounties on them."

"A well-geared crew engages soldiers of the Army of the Damned deep in a pirate's cave, on their way to valuable "Golden Age" artifacts of power."

"Having traveled to an exotic island filled with ancient Golden Age ruins, a veteran Pathfinder blasts a blunderbuss into the scaly hide of a Gorgon!"

"Deep within an uncharted jungle, a lone adventurer hang-climbs across a vast chasm on her way to lost treasure, while a wild bear and exotic bird roam far below."

"At a Western Tropical Freeport, a captain works on making repairs to her boat, while her Lieutenant buys some fresh fishing bait, under the stony gaze of an imposing Discovery Zone monument."

A green-sailed ship rests in the harbor of a Tropical Freeport.

Pirates face off over their swords on the deck of a ship.

A Ship goes down

Two Flintlock Pistols against an Army of the Damned...

A ship sails the oceans, passing a gargantuan statue.

An enormous Whale slaps the surface of the sea as he passes a Ship.

A triple execution at a Freeport.

A couple of Pirates settle their differences with a brawl.

Plunder Shipwrecks under the sea to find loot and secrets...

Fighting the Hydra - and his Ogre friends!

The Sextant is an invaluable tool for traversing the vast oceans.

"Deep within the Eastern Temperate region, an intense battle takes place as a Company furiously defends their mountain fortress against a cavalry charge aided by mobile field artillery!"

Bringing a Cannon to bear against your enemies' fortress can be a great way to bring the walls down.

"The duelist able to load ammo quicker - both statistically via character progression, and also skillfully through active-reload mini-game - emerges victorious with a dual-wielding blast!"

"A team geared with gliders soar off the coast of a mysterious jungle island..."

"A pirate raiding party engages in heated combat aboard a Royal galleon, seeking to commandeer the enemy ship, as an onlooker prepares to grapple over!

"Navigating the jungle river rapids on a rickety raft, an adventurous explorer spots some of the region's wildlife, including giraffes, elephants, rhinos, and tigers among others."

"A Lieutenant frantically attempts to put out a deckfire after a 'liquid flame' attack - or was it from fire arrows? Or perhaps the Drake overhead? Buckets can be used to douse fire, bail out a sinking ship, transfer between containers, its uses varying by saltwater or freshwater!"

"Facing down a group of 'Soldiers of the Damned', a skilled warrior wields a powered-up two-handed mace for maximum attack power!"

"A High Desert Freeport bustles with activity mid-day, with adventurers from all over the ATLAS meeting to buy and sell goods, trade exotic items, recruit for forthcoming voyages, and tell grand stories of their legendary exploits!"

"A group of travelers takes a break aboard a roaming NPC merchant trade ship, to do some business with the pilot and relax while their weary bones."

"A cannoneer does direct battle with the legendary Ghost Ship, after tracking its progress across the ocean for days to witness its rare appearance!"